Pythias are a race of powerful beings that feature primarily in Hello Charlotte Episode 1, but are referenced throughout the series. The Pythias were inhabitants of a land within the TV World known as "Delphi" before their world ceased to be by the end of Episode 1.

Pythias are beings that are beyond comprehension, and are said to be perceived differently by each race. They are incredibly powerful beings that can create their own realms without the need for Oracle powers, and are thus considered to be extremely dangerous.

There are some distinctions between males and females. Males are referred to as "Frei" and have two narrow eyes on each side of their faces, one above the other in proximity to each other. Females are called "Freya", and instead have two human-like eyes and one large one in their foreheads. Some Pythias have additional limbs.[1]

What precious little is known about the legacy of the Pythias is revealed through monologues from both the Librarian (Frei) and later Umbrella Man in Hello Charlotte Episode 2. The Pythias enjoyed prosperity in the pre-Oracle era. The emergence of the Oracle proved to be divisive, and war would soon break out between the two major opposing parties; such was the beginning of the first Godhunt, as recounted by Frei. Initially, the Globalists proved too formidable due to their vast numbers, and mass suicides and desertion thinned the ranks of the Individuals even further.

Umbrella Man elaborates further on the pact between the Oracle and its Globalist hosts. As the Globalists themselves didn't fully believe that their wish would be realized, it thus became twisted. Consequently, the process was slow and agonizing — thoughts, feelings, and memories became shared by all hosts without the loss of their sense of selves ("Loss of privacy without loss of ego!" - UM). The Pythias would then denounce the Oracle and retaliated violently against it, which sparked the second Godhunt. The Executioners organized, donning distinct white masks, and brought the Globalists to their knees; Charlotte and Felix arrived in the Slaughterland in the aftermath of this second clash.

The Pythias have a cameo appearance in Hello Charlotte: Delirium, found only in The REDRUM. Dr. Huxley was keeping a livestock of them for his experiments, and interacting with them will result in Charlotte being discovered and inevitably killed by the doctor.

The Pythias do not feature at all in Hello Charlotte Episode 3, but are mentioned a few times, most notably in the 6F laboratories. A Pythia appears briefly in the HC3 trailer (found below). 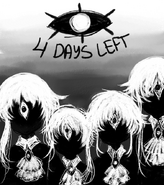 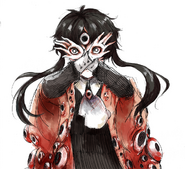 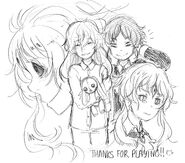 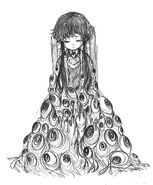 Charlotte, Magcat, two Pythias and several characters from etheranes other games.
Add a photo to this gallery

Retrieved from "https://hellocharlotte.fandom.com/wiki/Pythia_(Race)?oldid=14680"
Community content is available under CC-BY-SA unless otherwise noted.