This article is a Work in Progress and may not yet be completed and/or presentable.

Charlotte awakens hungry, and her first task is getting food. After getting food and eating, she wanders a bit, interacting with her housemates, until Doctor Huxley asks her to babysit his nephew, Felix. The two then wander more before Charlotte decides to go to bed.

Upon waking, Felix is gone, and there’s a weird new room in the House, containing a giant TV, so Charlotte goes into the TV to investigate. After puzzling through a channel full of hostile bears, Charlotte finds herself in a TV Hall, and goes into the next TV to find Felix.

She finds him and they puzzle through a library channel together until the last puzzle, in which Felix is decapitated. A strange figure shows up and tells Charlotte to go through the door and change the channel, that may work to make things different. Upon changing the channel, Charlotte finds the space has been reversed and Felix is still alive. The two find the figure in question--a being called Frei--and are told they need to continue moving through the channels and after solving the last puzzle again without anyone dying, they move onto the next channel.

The next channel is a labyrinth of doors, in which more puzzling is involved until the pair arrive at a door that requires a sacrifice. Unable to pass, they go through another door (the morse code when entering the door translates to "YOU ARE KIND. THEREFORE, YOU MAY PASS.); this door leads to a maze. The path to the maze is blocked off, and someone needs to be left behind to stand on a button which removes the barrier. The player is given the choice of who to leave behind, though it takes a bit of arguing to let Charlotte stay behind first. When leaving Felix behind, Charlotte has no luck in finding anything useful, only discovering more confusing rooms with nothing in them; when she returns, Felix has wandered off, so Charlotte goes to find him and finds a white-haired girl has killed him, and since Charlotte is unable to escape, gets killed by her as well. Once reloaded, or if the player convinced Charlotte to let Felix explore first, the two decide to send Felix into the maze to see if they can find anything useful. While Felix is gone, Charlotte is approached by a Masked Man who--based off of what happens next--offers to possess Charlotte’s body and find and kill a victim to use as the sacrifice. The white-haired girl approaches soon after, and the Masked Man kills her. When Felix returns, Charlotte is stuffing the body in the incinerator, and is visibly shaken up.

Between channels, Felix remarks how there should be more beings in this world pythias and the next channel shows where they all are. Its an execution channel where pythias lay dying all around, Charlotte and Felix don Executioner Masks to fit in and continue on. In the last channel, the two talk to the Oracle, who tells them this world is dying and there’s only one way out. Charlotte accepts this and then accepts the Oracle into her mind, allowing them to escape the TV World.

Back in the real world, Charlotte tells her whole story to Umbrella Man, who is impressed she was able to contain an Oracle, and then he sends her to bed.

Intermission
Add a photo to this gallery

According to a text document labeled: "The initial story.txt" which is included in the HC Art Pack, Hello Charlotte 1 had a draft story that went very differently from what was seen in the final release. Originally, the game was much shorter and was intended to end in the Bear Channel, and the Pythias had no presence at all. Felix — who was the deuteragonist of Episode 1 — was much more rabbit-like in theme, which was toned down quite a bit in the official releases, and was also planned to get taller; it is not specified how much time, if any, passed for this to occur. Lastly, Felix and Charlotte were going to interact very little with each other while in her house, only once as stated in the document.

As is seen in the final game, Charlotte still enters the TV World and ends up in the Bear House channel, where she then has to save Felix from the Court of Bears (nothing resembling this "Court" seems to be left over in the game). As the bears apparently lived by the core value of "an eye for an eye", Charlotte willingly sacrificed one of her eyes (which were originally going to be black) to save Felix. The game would end when Felix gives her one of his own eyes to compensate for the one she sacrificed, which would lead to them developing a bond together. Charlotte can be seen with one black eye (hers) and one white eye (Felix's) in the image to the right..

Hello Charlotte was at one point planned to have multiple main endings, much like its successors. These are likely remnants of a scrapped draft of the story (not the one documented in the Art Pack). Those endings are:

The captions in the gallery are the image filenames. Please do NOT change unless a typo or error is observed. 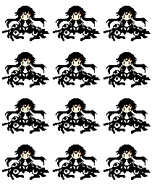 Intertitle25
Add a photo to this gallery
Retrieved from "https://hellocharlotte.fandom.com/wiki/Hello_Charlotte_Episode_1?oldid=15199"
Community content is available under CC-BY-SA unless otherwise noted.